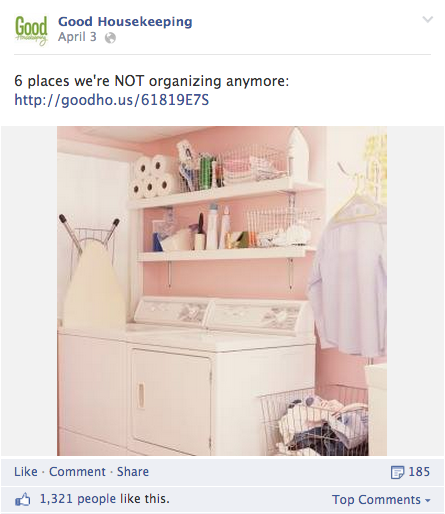 Last week I was scrolling through my Facebook and I came across the Good Housekeeping article – “6 Places We’re NOT Organizing Anymore.”  Naturally, it caught my attention and I, of course, quietly gasped.  What areas could they be talking about? I asked myself.  I immediately clicked on the article to see what over 1,000 people “liked.”

As I read the article it all made sense and I knew where the author, Lauren Piro, was coming from.  The areas she confronted are a constant struggle for many of us so I completely understand sending up the white flag.  And, to Lauren’s credit, leaving these areas disorganized is not going to prevent you from reaching your ultimate goals in life.  However, as the person who comes in when these areas become overrun with clutter and cause daily frustration, I can attest to the fact that some level of organization is necessary.  After all, organization is about making your life easier by living lighter and more efficiently.

All of this got me thinking… maybe we need to address some of these areas in a more simplistic way and just get real about the level of organization needed to make life easier and not add more work to the to-do list.

So, here’s what I have for those who would still like to have a little order to their chaos…

ON THE ELEVENTH DAY OF NEATNESS…

In all the neat gift recommendations over the last couple of weeks, I have yet to bring you something just for the little ones. Well, today is the day! On the eleventh day of neatness, I give you the treat for the most spirited recipients of all. Actually, it’s even a little bit of a two-fer since it’s a gift from LEGO® and a great storage solution from The Container Store.

The famous interlocking LEGO bricks have been around since 1949 and have been entertaining young, creative minds for decades—mine included. The most advanced set we had growing up in the ‘80s was LEGO® Airport, which must be why I feel qualified to scrutinize the layout of JFK terminals…but I digress.

The LEGO Group has consistently pushed the envelope of creativity by developing themed sets throughout the years, even launching several fantasy and sci-fi partnerships with Star Wars™ and the Lord of the Rings™ franchises, among several others. My absolute favorite, however, is the LEGO® Architecture theme they have on the market. They have taken the building and construction of LEGOs to an entirely new level.  Now, kids can build everything from their very own Sydney Opera House™ to Frank Lloyd Wright’s Fallingwater®  estate.  Kids can even build their very own miniature LEGO New York City, with cityscape themes of the Guggenheim Museum® , the Empire State Building, Rockefeller Center®  and even the United Nations Headquarters!

And for the extra special creative kid, this summer they released the brand-new, all white LEGO® Architecture Studio that ignites creativity and lets kids decide just what kind of buildings are possible. It’s an incredibly fun, challenging and always classically good time playing with LEGOs.

Now, to keep your living room floor from becoming littered with a thousand pieces of plastic imagination fuel, The Container Store has a fantastic solution ready to go! The fun LEGO® Head and LEGO® Brick storage bins are a great way to keep all those themed sets of LEGO bricks together in one place, plus they look really cool on a toy shelf!

School is back in session and soon your home will be filled with tons of your child’s beautiful artwork. Start saving special items and keeping them organized this year with Artkive! You’ll never have to feel bad about throwing away one of their precious works of art ever again. Plus, you can make calendars, books and even share the artwork with friends and family with just a couple swipes of your finger!

Lil Davinci is a simple way to display and store your child’s treasured pieces of art.  Each frame can store up to 50 masterpieces, helping you keep these special memories safe while eliminating clutter from your kitchen refrigerator.  These easy to update frames make the idea of framing every piece of your child’s art a breeze and makes it easy to show them just how proud of them you really are!  This fantastic idea isn’t only for your child’s artwork either; Dynamic Frames also makes other great solutions such as the Pinster shadow box frame for displaying memorabilia and gallery frames, which can store as many as 288 photos!

Playtime clean up has never been easier than with the Lay-N-Go.  An activity mat with a built-in drawstring, the Lay-N-Go makes it easy for kids to spread out over a 5 foot area to play with their favorite toys.  When they are done playing, all you need to do is pull the drawstring tight to close the storage sack.  Once closed, the Lay-N-Go is completely sealed and won’t let any pieces slip out.  Sound too good to be true?  Watch it in action – here is a short video the Fazackerleys (creators of Lay-N-Go) made to show you how quick and easy playtime clean-up can be!

If you have little children, I am sure that you are familiar with the constant flow of artwork that comes home with them almost daily from their daycare or school.  With every new piece being their favorite, you can’t help but put it on display – not only are your refrigerator doors full, but their bedroom walls have become a gallery and your desk at work even houses several of their masterpieces.  As proud as you are to display their work, you may be wondering if there is a way to more neatly showcase their art that won’t leave your walls or refrigerator cluttered.

Several years ago, the ladies of Wexel Art were pondering the same thing, which led to the creation of the Wexel Art Floating Frame.  This easy-to-install, acrylic panel frame comes with 4 pairs of strong magnets that allow you to quickly and effortlessly change the prized work of your little artist (or, update the latest photo of your child with this week’s favorite Kodak moment).  The clean modern design blends well with a variety of decorating styles and can easily be incorporated into a kitchen, a child’s bedroom or playroom, a casual family room, or even a home office.  Use one frame to make a singular statement, or group them together to create a trio or a fun collage.  These frames will not only leave your walls looking neat, but they will also make your little artist feel proud as you display their work in a more special way.

Wexel Frames come in various shapes, sizes and styles, which makes them the perfect solution for displaying:

This Spring, Wexel Art will also be offering a limited edition run of frames designed by Eva Zeisel.  Visit their website to find out more about the various sizes available, or to inquire about creating custom shape or custom size frames.

As  a professional organizer, there are certain products and services that I consider my go-to resources – my tried-and-true favorites.  Resources make my list for reasons such as quality, efficiency, ease-of-use, value and company customer service.  For the past several years, one of my favorite products on this list is the Container Store’s Elfa shelving and drawer system.

From creating a versatile closet system to a functional home office work station, there are endless possibilities for this system.  The various Elfa components allow you to create customizable solutions to fit your closet, kitchen, garage, pantry, office and playroom.  Whether you are looking for drawers to house snacks in the pantry, or racks for shoes in your closet, Elfa has the answer to help you get your belongings more organized.  In addition, the versatility of the system will allow you to continue to edit your storage solution as your needs change.  Maybe right now you need a system to organize all your children’s toys, but in the future you will need it to organize their clothing… not a problem.  You can reconfigure the components you already have (including bringing pieces back to the Container Store to have them cut to fit) and you can buy new components to add-on to your current system.  This makes Elfa a great value solution, as you will be able to continue to benefit from your investment for years to come.   You can even take the system with you if you move into a new home and reconfigure it for the new space.  So while it is built to look like a permanent system, its semi-permanent nature will allow you to easily take it with you so you can continue to keep yourself super organized.

From the beginning phases of designing your solution at the store to the installation in your home, the experience is seamless.  I strongly recommend that you check out Elfa to help you get organized in 2011.  Plus, if you shop before February 15, you can save 30% on your system and installation.  A deal that only happens once a year! 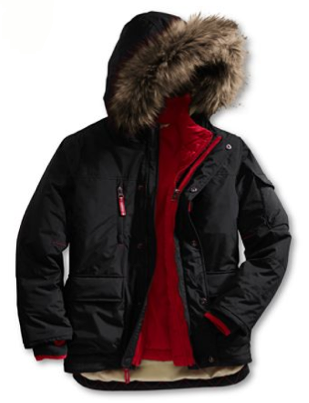 As a child, I remember my mother always buying clothing for me that was a bit too big so that it would fit me for more than season.  While I may have looked like I was drowning in fabric one year, the following year it was almost guaranteed to fit perfectly.  Even though I always wanted my clothing to fit properly from the beginning, as I look back I really can’t blame her for doing this as it was cost effective and efficient (two characteristics that I now have a business focused around).

Today, despite not having children of my own, I know that this issue still plagues mothers and their children as they shop annually for new sneakers, sweaters, pants and jackets while trying to beat the inevitable growth-spurt.  This is one of the reasons why I was so fascinated to discover the Lands’ End Grow-A-Long coat when I was recently visiting a friend during his sons’ play date.  I was so excited to find that Lands’ End had created a jacket that will grow with your son or daughter to allow for at least two, maybe three seasons of wear!  Finally, someone had incorporated efficiency and functionality into clothing in a way that went beyond just versatility.

The Grow-A-Long feature, available in both snow pants and jackets for boys and girls, allows the garment to grow up to an additional 2 inches on the sleeves and pant legs.  The extra material hides unnoticeably inside the sleeve or pant leg and is easily released by snapping a thread.  In addition, not only are the garments efficient, but they are also stylish, warm and versatile.

This amazing feature, coupled with the quality that Lands’ End has come to be known for, makes this line of clothing an excellent choice for children.  It will not only save families money, but it will also save them from the build-up of out grown clothing and trips to the local donation drop-off.